Flattening the Spike and defeating COVID-19

The Corona virus pandemic also known as COVID-19, has emerged as a devastating challenge to the whole world and it has shaken the global economic, social, and healthcare systems. Only in Pakistan, if we count there were almost around 1.3 million people who were affected by this deadly pandemic and more than 28 thousand deaths according to the government of Pakistan stats. MERF aims to save life in times of crises, and help rebuild the shattered health services structures in the country during natural disasters, conflict and disease or health system collapses with governments, international organizations and private entities. The specialized Covid 19 treatment facility in Nistherabad, Peshawar funded by the European Civil Protection and Humanitarian Aid Operations (ECHO) with the support from the International Rescue Committee (IRC) and dedicatedly managed by MERF close to motorway. The medical team are working in great enthusiasm during the pandemic period as well and serving the effected people. 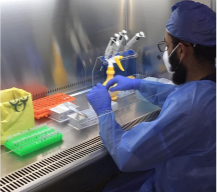 The hospital which has 110 beds with fully equipped labs, 24/7 oxygen supply having ICU, HDU and isolation patient wards. The hospital in not only serving people from and around the city but also addressing the emergency and urgent need from nearby cities and whole providence and this all is free of cost. 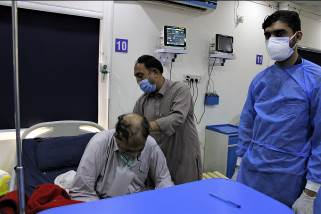 Among so many successes of this hospital here is a heartwarming story of covid-19 survivors, that how he got a new life in province of KPK with the help of MERF team. Syed Kamal, age 45, was received by hospital from Hangu, Orakzai near Peshawar with underlying medical conditions including diabetics having fever, dry cough and body ache with dropped Oxygen saturation level. He said, “Two months later, I still recall short of breath standing up. When I first began experiencing tremendous fatigue and shortness of breath, my first fear wasn’t that I had come down with COVID-19: It was that I will be on Ventilator and never wake again.” But due to his low oxygen saturation and difficulty breathing they put him on ventilator. His response to the therapy was unresponsive and initially he got worse, stated by Dr. Imran – a dedicated Pulmonologist at the
facility. He was shifted from private room to isolation and his Oxygen delivery device changed. But with the non-stop efforts made by MERF medical team he was discharged later in two weeks from hospital and got better. And this is just a story of one patient there are many more such cases as-well who are blessed with a new life.